Since the dawn of mankind, taste, texture and consistency (viscosity) have defined the preferences and appetizing qualities of certain foods, albeit ancient man had few menu selections. Modern technological innovations have spawned an impressive array of new compounds that have the capacity to create any texture and viscosity the human mind (and palette) can envision.

In the case of reduced sugar beverages, rebuilding texture demands multiple ingredients and presents numerous challenges for drink manufacturers because the replacement of sugar with either natural or artificial sweeteners can deepen or lessen the perception of sweetness. It can also influence mouth feel and the viscosity of the finished beverage.

Obesity and its many challenges to personal health has pin-pointed sugar as a major contributor of unnecessary calories. This has evolved into a vigorous competition among manufacturers to create beverages that have lower sugar content. The problem is that when sugar is reduced from a drink and replaced by high-intensity substitutes, the sweetness has retuned, but the texture of the beverage has often gone with the wind. This is due to the missing mouth feel and viscosity that always accompanies dissolved sugar or corn syrup.

The Ongoing Need For Texture in Sugar-Reduced Beverages

In order to provide consumers with the same drinking experience as fully sweetened beverages, texture must be rebuilt into the formulation. Without texture modifiers, such as stabilizing guar gum powder, drinks may seem thin and lack substance.

Successfully developing a sugar replacement in beverages is a process that can be both complex and labor-intensive. It greatly depends upon the determination of the proper levels of sweetener and hydrocolloid protein, which refers to a class of food ingredients that serve as thickeners, water retention agents, emulsifiers, stabilizers, gel-forming agents and dietary fibers. These elements are vital to the effective replenishment of the functionality of sugar. Explore our guide to avoid lumping while dispersing guar into water.

Traditional sweeteners contribute to beverage stabilization by thickening, binding and film-forming. They also influence the perception of flavor and sweetness, which is deeply linked to consumer preferences and makes it very challenging to replace sugar in many liquid refreshments. 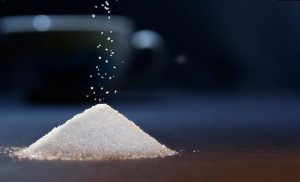 Lower viscosity often means that a liquid will clear the palate too quickly, not allowing flavors to linger in the mouth or on the tongue, which in turn reduces ultimate enjoyment. Recreating a satisfactory experience with a beverage requires the introduction of texturizing systems, such as guar gum powder applications, that will serve to replace both the texture and mouth feel of sugar in drinks.

The Importance Of Texture and Viscosity in Beverages

One dictionary definition of texture is “the feel, appearance, or consistency of a surface or a substance.” According to Mary Anne Drake, professor and director of the Sensory Analysis Center at North Carolina State University in Raleigh:” …texture and mouth feel are sensory terms. They are perceived, and therefore measured by humans, not machines.

Mouth feel refers to the oral-tactile qualities perceived in the mouth including, but not limited to, astringency, viscosity, slipperiness and mouth-coating…Managing texture and mouth feel is particularly challenging in ‘better-for-you’ beverages, such as those reduced in fat or sugar, or enhanced with nutrients such as fiber, protein, vitamins and minerals.”

In the case of drinks, texture concerns two specific factors; namely, how it feels in the mouth, and how it looks and adheres or pours from the container. Guar gum powder greatly influences mouth feel, which begins the moment the beverage touches the lips and lasts until is swallowed. A ‘melting’ texture can transform a mundane drink into a creamier and more substantial concoction. When pieces of nut or fruit or other substances are introduced, the libation becomes both more enjoyable and more complex to create.

Viscosity is defined as “the state of being thick, sticky, and semi-fluid in consistency, due to internal friction.” Examples of this can be found in products such as syrup and molasses, which have a higher viscosity than water.

Virtually every processed food, from soup to nut bread, exhibits some level of both texture and viscosity during processing to final consumption, but viscosity, is more clearly prominent in soups, puddings and beverages, where it can range in form from a solid, gel-like flan to a flavorsome sports drink. 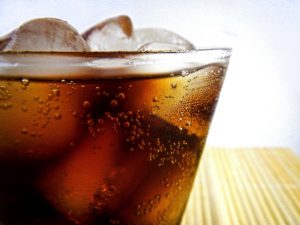 Recent studies have indicated that the viscosity of sugar is not the only factor in providing body to beverages. The inclusion of diverse flavor sensations, including metallic, dryness or astringency, also aid in the viscosity process.

This highlights the fact that when sugar is reduced or removed from a beverage formula, the best way to rebuild it is to create a symbiotic balance of compounds, sweeteners and flavors that will incorporate the least amount of ingredients necessary to achieve the same texture and mouth feel of a fully sugared product.

Guar gum is extracted from the endosperm of the guar plant, the halves of which are then grounded to the desired fineness. Owing to it chemical structure, guar gum is a pure thickener, that greatly contributes to both the viscosity and texture present in reduced-sugar beverages. It is commonly used in all types of non-dairy drinks (juices, etc).

Due to its high molecular weight, the amount of guar gum needed in drinks formulations is very low, typically 0.05% to 0.1%. The end result is a smooth, mouth-coating effect. This efficient thickening property is highly desirable and accounts for the popularity of the guar gum powder produced specifically by Guar Resources.

The most important reason guar gum powder is used so frequently in beverages is because of its resistance to breakdown under the low pH conditions present in drinks. (This refers to a measure of how acidic water is. The pH level of water is a vitally important measurement concerning its quality.)

Guar gum is soluble in cold water, which makes it easy to utilize in beverage plants as a pure thickener and natural additive that guarantees a long shelf life life for many types of juices and beverages. Moisture and fat content are the two key determining factors for texture creation. Often building back texture in reduced-sugar beverages requires multiple ingredients because sugar-substitution formulas react differently depending on the type of beverage involved. 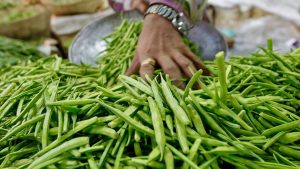 Concerned about organic fraud? Discover why you should only trust USDA Certified organic.

Once again according to Leanne Levy: “A formulation to suppress negative sensory aspects in carbonated beverages is different than what would be appropriate for a protein-fortified beverage, and a formulation that enhances taste and mouth feel in a reduced sugar orange juice is not the same as that of a reduced sugar yogurt drink.”

Two recent British studies examined whether perceptions were altered when consumers were introduced to a beverage that became heavier or thicker in texture. The first study had 24 participants from the University of Sussex in the United Kingdom rate the sensory characteristics of 16 fruit yogurt drinks of increasing viscosity. Results revealed that people did perceive small changes that were very similar to the actual viscosity of the drinks.

The second study involved 25 volunteers from the same university who were asked to evaluate eight versions of a fruit yogurt drink for sensory characteristics and expectations of satisfaction. The drinks varied in texture, creamy flavor and number of calories. Results indicated that the thicker versions of the drink were found to be more filling and offered a greater expected satiety value, no matter what the beverage’s actual caloric content.

The Demand For Guar Gum Powder

The demand for guar gum power is expected to reach $1.15 billion by the year, 2022, with North America leading the way and estimated to account for the largest market size during this forecast period. Over the course of the last five years, the United States has produced 4,600 to 14,000 tons of guar.

Since 1999, Texas acreage for growing guar beans  has fluctuated from about 7,000 to 50,000 acres. The world production for guar gum and its derivatives is about 1.0 million tons. The largest American producer of guar gum powder is Guar Resources.

Guar Resources (GR) invested heavily in the restructuring and rebuilding the brand by constructing a new technologically advanced processing plant where researchers push the boundaries of industrial science every day.

Completed in 2016, our new facility, which is located in the dry, rolling hills of Brownfield, Texas, performs bean splitting and powder production and operates 24/7; the northern sector of the plant performing splitting operations; the south side converting splits into powder. Totally committed to maintaining GR’s current position as the leading producer and purveyor of guar gum powder within the United States, our plant produces millions of pounds of guar gum powder every year and houses three bean storage facilities, which can store as many as 50 million pounds of beans collectively. GR’s most valued promise is our unwavering commitment to fully support our clients.

We are at the forefront of research and innovation in promoting the use of guar gum powder for an ever growing number of diverse industries and a myriad of sustainable applications. GR is  the only USA-based supplier of guar powder that’s made from USA-grown guar beans and is USDA-certified organic. Our Guar is also Kosher, Halal, Non GMO and FSSC 22000 food safety certified and we are fully ISO 9001:2015 compliant. For drink manufacturers seeking to create tasty, reduced-sugar beverages, our guar gum powder can serve to develop delicious drinks for a public demanding newer and healthier alternatives to liquid refreshment. Submit a written inquiry or call our team at Guar Resources today — (806) 637-4662.